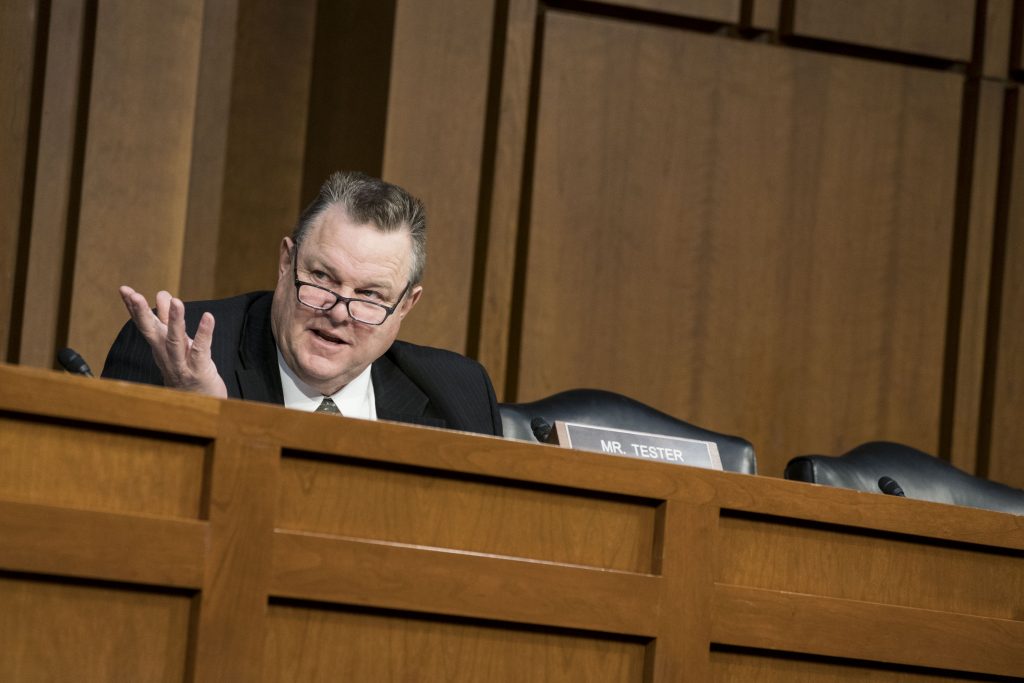 WASHINGTON — The U.S. Department of Veterans Affairs on Monday began the years-long process of restructuring its national health-care system, a venture that will require presidential and congressional approval before it can begin.

Restructuring would mean closing or consolidating some medical facilities, likely provoking opposition from communities and members of Congress.

Montana Democrat Jon Tester, chairman of the U.S. Senate Veterans Affairs Committee, said Monday that “any effort to bring our veterans’ health care to its knees is a failure for me.”

“I will fight tooth and nail against any proposal that blindly seeks to reduce access to VA care or disadvantage our veterans,” Tester said.

Illinois Rep. Michael Bost, the top Republican on the U.S. House Veterans Affairs Committee, said he looks forward to the work “the Commission will do in the months ahead to ensure that the recommendations released by VA today stand up to scrutiny.”

“For too long, VA’s infrastructure has slowly crumbled. Veterans from all corners of the country deserve better,” Bost said.

A report from the secretary of the VA, divided into two volumes and released Monday, predicts that the number of veterans in the Northeast and Midwest will decline in coming years, while those settling in the Southeast, South and Southwest will increase.

“These changes are largely driven by the aging veteran population and the expected pattern of military separations near military bases,” the report said.

According to the report, the VA will likely continue to struggle to cope with the number of veterans living in rural or very rural areas – a group that currently represents 33% of the population enrolled in the VA.

The Asset and Infrastructure Review examines the dozens of ways veterans’ health care needs will change over the next few decades and the expectations of where they’ll live, so the VA can try to put put in place facilities, staff and programs in the best locations.

“In some markets, the veteran population is growing rapidly, so we are adding new medical centers, community outpatient clinics and other facilities to meet this ever-increasing demand,” VA Secretary Denis McDonough wrote.

“In other markets, the opposite is happening — the number of veterans is declining — but even in those markets, we’re investing in new facilities that better meet the needs of the veterans who live there.

If President Joe Biden and Congress approve the final set of recommendations, which will come from the Assets and Infrastructure Review Commission in about a year, the VA would begin implementing them no later than February 2026.

But if Biden or lawmakers, through a joint resolution of disapproval, reject the plans, the whole process stops.

“While VA and community providers will continue to have difficulty recruiting and retaining staff in rural areas – 136 rural community hospitals closed between 2010 and 2021 – VA is committed to providing accessible VA healthcare through new points of care, partnerships, telehealth and virtual care and other modalities,” the report states.

The VA will likely continue to face stiff competition with the private health care market for doctors and nurses, especially as nationwide shortages are expected to begin.

According to the report, the VA expects that within two years there will be a “shortage of 14,280 to 31,091 psychiatrists, and 77% of counties” will experience a severe shortage of mental health care providers.

But the report, required by Congress to “modernize and realign the VA’s aging health care infrastructure,” also examines how the people the VA treats will continue to evolve, as will the types of services the VA provides to these veterans.

Over the next seven years, the VA expects to see an increase in the proportion of women and people of color, as well as a decrease in the average age of veterans.

“The profile of enlisted veterans is becoming increasingly diverse. For example, the lifting of laws that had previously led to a pre-Vietnam U.S. military that was less than 2% female, has resulted in women now making up more than 19% of active duty service members,” the report said. .

“As the population changes, the health care needs of the VA enrolled veteran population may vary based not only on service-related conditions, but also on demographic differences and social determinants of health.”

The VA, however, warns that not all healthcare needs can be predicted, with many future needs depending on how the fight unfolds in the years to come.

For example, the VA says the use of improvised explosive devices in the wars in Afghanistan and Iraq, combined with improvements in medicine, has allowed many soldiers who would have died in previous wars to survive. These troops, however, lived with “amputation, [traumatic brain injury]infertility, genitourinary lesions, 47 and other conditions that have strained AV’s ability.

“VA cannot predict service-related conditions for prospective veterans,” the report said. “Given this uncertainty, VA must be able to innovate and quickly adapt to the care of veterans, regardless of the health challenges they face.”

Sonia Gandhi offers to ‘step back’ from her main role, the congressional committee refuses