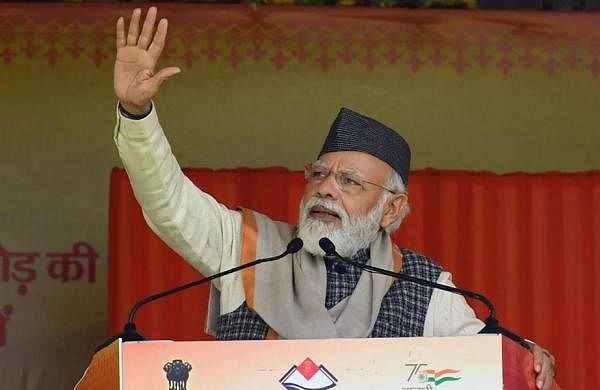 DEHRADUN: Prime Minister Narendra Modi on Thursday dedicated infrastructure projects worth Rs 17,500 crore to the people of Uttarakhand. Although he took no name, the obvious target was Congress.

You also saw those people who used to say ‘take anything from Uttarakhand but save my government’.

He was referring to an alleged 2016 video in which Congress leader and then CM Harish Rawat were allegedly seen negotiating a financial deal to buy back support from rebel MPs.

Stating that the people of Uttarakhand had seen two schools of thought – one which wants to keep the hills deprived of development and the other which works day and night for their development – the Prime Minister said that several generations of people in villages have been deprived of roads, water and other basic facilities by previous governments.

“Shouldn’t such people be punished? Can one still be trapped in the illusion of their false promises While I correct their mistakes, you teach them a lesson,” Modi urged the crowd.

The Prime Minister asserted that the BJP governments in the Center and in the State had made an unprecedented development in Uttarakhand while other political parties “always insulted our soldiers and deprived them of everything – a first-rate pension rank, weapons, facilities and respect “.

Playing the religion card, he mentioned that Kedarnath, Kashi Vishwanath and Ayodhya, linking religious tourism with the generation of jobs and income. “The biggest beneficiaries of these projects will be the people. We can see that when the facilities have increased in Kedarnath, the number of pilgrims is breaking records,” he said.

The prime minister also insisted on the “twin-engine government” saying that “the new roads, rail projects, hydroelectric projects, the tourism sector, the attraction for yoga and the homestay movement make this decade the decade of Uttarakhand “.

Modi mentioned Kedarnath, Kashi Vishwanath and Ayodhya, linking religious tourism to job and income creation, saying the biggest beneficiaries of these projects will be the people.