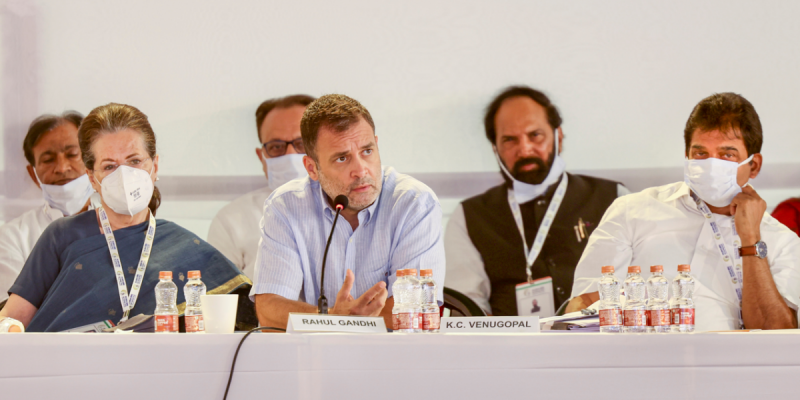 Udaipur: In what is clearly an acknowledgment of the success that the Bharatiya Janata Party (BJP) has achieved through its multi-level outreach program among the unrepresented and under-represented sections within the Other Backward Class (OBC) and Scheduled Castes (SC), the Congress decided on Saturday May 14 to reserve places for “sub-castes” within these groups in all its party committees.

Of the six panels that Congress has established in Chintan Shivir, the Social Justice and Empowerment (SJ&E) Panel plans to recommend to the Congress Working Committee (CWC) that the reservation for SC/ST/OBC/minorities be increased to 50% in all its committees of its current provision to have 20% reservation for non-privileged groups.

“The policy has undergone significant changes. It is time for us to implement the new reserve to accommodate and represent diverse groups in our party at all levels,” said SJ&E Panel Leader Salman Khurshid.

Explaining how the reservation system will work, he said the panel proposed to set up a social justice advisory council to collect population-wide data across India and give 50% short-term reservation to these groups.

“The reservation system is proposed to be implemented from stand level. The task before us is first to identify unrepresented and underrepresented groups and then to represent them in party bodies,” said K.Raju, National Congress Coordinator for SC/ST/ OBC/Minorities.

Raju, who is also on the SJ&E panel, said that over the past two days, the panel has been discussing organizational reforms and policy initiatives that Congress can adopt as part of its policy agenda.

One of the most important organizational reforms that the party has decided to implement is to have a unified department for SC/ST/OBC/minorities instead of the four separate departments that currently exist.

In another important recommendation, the panel also decided to push for the reservation of women in parliament and state assemblies, and to have a “quota within a quota” to accommodate all castes and groups. religious among women.

As part of its political initiative, the panel also recommended the implementation of the Women’s Reservation Bill which guarantees 33% of positions for women in the legislature. At the same time, he recommended booking in the private sector.

Khurshid said that if the CWC accepts these recommendations, the party will also explore ways to implement these policies in states governed by Congress. “The legal and technical aspects will have to be settled. There may also be some opposition in states, but we are committed to implementing these policies,” Khurshid said.

Moreover, the Congress has expressed its full support for a caste-based census among OBCs which has been blocked by the Modi government. “The UPA government had already done a socio-economic census among the OBCs. So we’ve always been open to the idea. Having a caste census will not be a problem for us,” Raju said. This will help the ruling parties to eventually formulate a policy of reserving OBCs in assemblies and parliament, he said, indicating that the main concern of the big-old party is to woo OBCs who have moved in large majority towards the BJP.

He also said that the SC/ST sub-plan introduced by Indira Gandhi, which provides a separate budget for these groups in all departments, should be enacted by central legislation. The SC/ST sub-plan or the special component plan is the most violated rule in all states, regardless of the parties in power.

Kumari Shelja, also a member of the panel, said that all these recommendations were decided after discussions with all fronts of the party, such as its student wing, the National Union of Students of India (NSUI) and the Mahila Congress. .

She said many of those recommendations were achieved by being “self-critical”, as party leader Rahul Gandhi had hoped in Chintan Shivir.

Interested in applying for a car title loan? Here are some useful tips – Phandroid