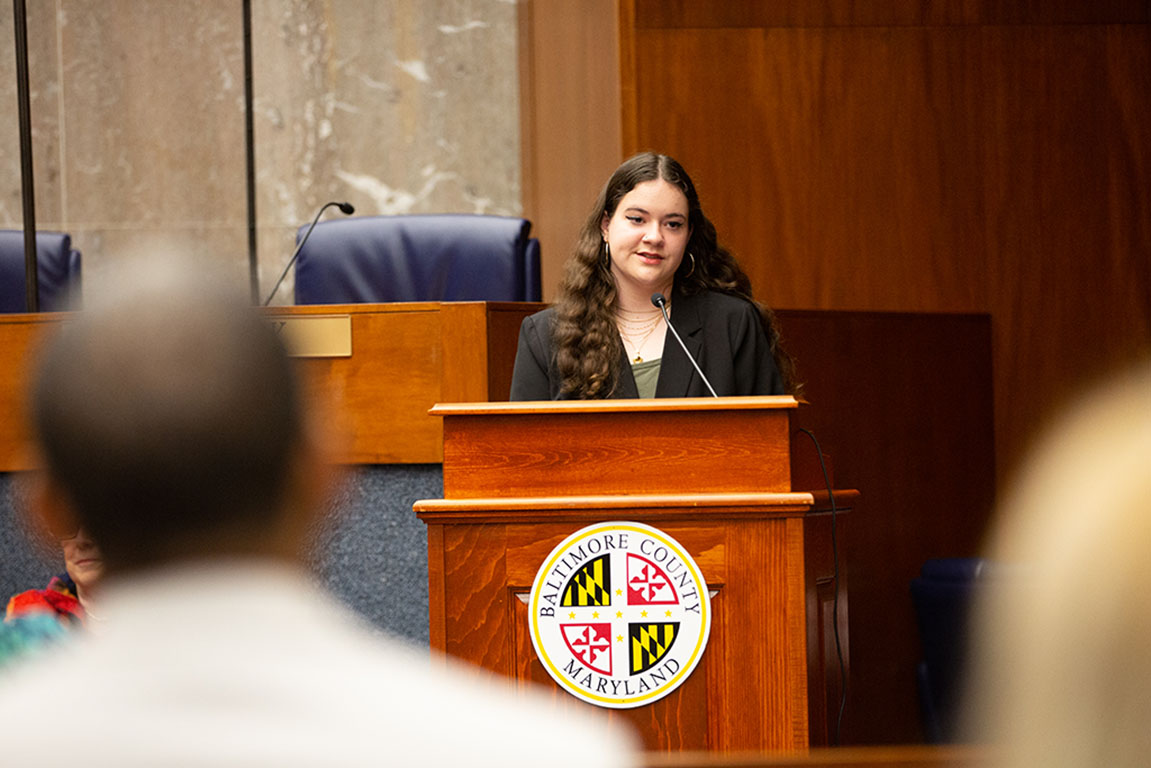 Like many freshmen at the University of Maine, Miriam Talalay has many passions – animals, drawing, and playing the violin, to name a few. What sets her apart is a Congressional Medal recognizing her excellence in all that she does.

The Congressional Award encourages and recognizes young people for initiative, service, and achievement, and the Gold Medal is the highest form of this honor with the most demanding requirements. Obtaining the gold medal requires the completion of 800 hours of activity over a period of two years, including 400 hours of voluntary public service; 200 hours of personal development; 200 hours of physical conditioning; and a five-day, four-night expedition or voyage of exploration.

Talalay, a freshman zoology student from Luterville, Maryland, was one of 549 gold medal winners from 41 states recognized at the Gold Medal Celebration in August.

To earn her award, Talalay, also an Honors College student, volunteered with a local Society for the Prevention of Cruelty to Animals (SPCA) providing foster care for animals; learned to play Irish jigs and Scottish reels on his fiddle; maintained a cycling training regiment; yoga, pilates and bodybuilding; and embarked on a multi-day hike through Surry, Maine while sketching and photographing flora and fauna for her online courses in nature journaling and bird biology with the lab. Cornell Ornithology.

She started working for her gold medal in September 2021, while in high school, and completed her duties during the COVID-19 pandemic.

“I was thrilled, so grateful to have received something that I worked so hard for,” Talalay said of the medal. “It’s being rewarded for doing what I already love. I also thought it was a great learning experience and an opportunity to start projects I already wanted to start. »

Devoting time to volunteering is easy for Talalay; she says it’s part of her DNA. She has fostered animals with her mother since she was 10, after learning she was too young to help out at her local SPCA at the time.

Over the past eight years, Talalay has cared for over 250 foster animals. At first, she gave them food and water, groomed them, played with them, introduced them to other people for socialization, and cleaned the cat litter boxes.

When she was older, she was also able to give animals their medications and vaccines and take them to the vet. His mother continues to be a foster family while Talalay studies at UMaine.

“I’ve always loved animals,” says Talalay. “When I was 3 years old, I carried around a 700-page encyclopedia and looked at all the pictures of animals.”

Her interest in studying at UMaine grew out of the fact that she spent part of her summers at her family’s holiday home in Surry throughout her childhood. She says she enjoys the wildlife and natural landscapes of Maine, which has helped make studying at UMaine appealing. Programs that offered extensive laboratory and outdoor research also convinced her to enroll in college.

“I’m just excited about all the opportunities here at UMaine,” she says.

While in college, Talalay participated in several activities that appealed to her love of nature and animals. She explores the outdoors and records and draws the plants and animals she sees for her natural history class. She also participated in the college chapter of the Wildlife Society, caring for pigs at Witter Farm and birdwatching on campus.

” It was great. I’m really, really happy here,” says Talalay. “All the teachers I’ve met so far are really, really interesting and hopefully people I can look up to later in life.”

Upon graduation, Talalay hopes to pursue a career that harmonizes her passions for animals and art, as an illustrator for scientific literature or wildlife photographer like one of her idols, National Geographic photographer Joel Sartore.

Prior to coming to UMaine, Talalay interned at the Blue Hill Heritage Trust for a few years teaching drawing classes, including creating how-to videos, and leading other programs for children. She also spends much of her free time creating pen and ink drawings and digital art.

Talalay says she hopes that while studying at UMaine, she will learn how to use lab equipment more effectively, connect and collaborate with diverse members of the campus community, and improve her analytical and communication skills. observation.

“I hope to learn many useful skills, whether it’s working in the lab or in the field or learning social skills that I can use in my career or in my daily life,” she says.