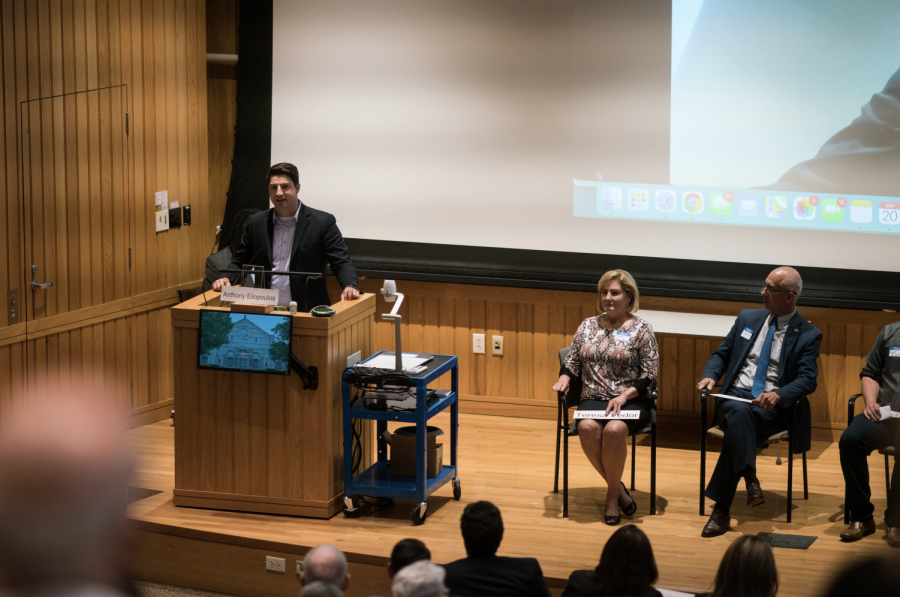 Last Tuesday evening, the candidates spoke to students and community members about their platforms and their positions on a variety of issues.

The annual Oberlin Community Nominees Night was held last Tuesday evening in the Dye Boardroom. The OCCN is an opportunity for people running for federal, state and local midterm elections to introduce themselves to Oberlin voters and answer their questions. This year was the first in its 30-year history that the OCCN was held on campus and planned in conjunction with Oberlin College students for civic engagement.

The OCCN planning committee was co-chaired by Alison Ricker, science library manager and member of the League of Women Voters, and Myranda Montoye, junior year in college, host of Oberlin SCE. The event was moderated by President and Associate Professor of African Studies Charles Peterson and timed to coincide with National Voter Registration Day. The planning committee worked with a coalition of 15 local organizations to organize the event.

In the past, OCCN has been held at Mount Zion Baptist Church in Oberlin, although organizers have experimented with the venues and structure. This year, Ricker hoped the change of venue would lead to greater student participation.

“I hope there will be a lot of people who will be interested in asking questions, and they will be questions that reflect the concerns of people between the ages of 18 and 22,” Ricker said.

Last summer, Montoye independently came up with the idea of ​​a Candidates’ Night, unaware that the event was already an annual tradition.

“Over the summer, I wanted to be very careful because I knew there were already a lot of people — community members — already doing this kind of work,” Montoye said. “And so I spent a lot of the summer connecting with these people and finding out what infrastructure there was already for voter registration and other civic engagement in the community, and then I found out the OCCN. I was like, ‘Oh, great! We already have this event.

While Candidates’ Night was designated as a nonpartisan community forum, the event featured 14 Democratic candidates and two Republicans, though others were invited. The unequal representation of political parties would normally activate the LWV’s empty chair politics. The empty chair policy states that when multiple candidates are running for the same federal seat but only one appears during an LWV debate, the candidate present cannot answer questions without their opposition present. Had this policy been implemented, the party’s skewed representation would have meant that Democratic candidates running for the U.S. Congress would have been barred from participating in the event’s question and answer segment. As a not-for-profit association, LWV could be held liable for failure to comply with this policy. For this reason, the organizers of the OCCN excluded the LWV from its official list of collaborators, meaning that the organizers did not need to adhere to the empty chair policy.

“It’s not unique to our event — other events in the state and around the country have also signaled a lack of interest or response from Republican candidates,” Ricker said. “I can’t assume there’s anything behind it other than, maybe they just don’t think it’s worth it. Maybe they’re in gerrymander neighborhoods where they don’t feel not that they really need to reach out to people, because they’re in a safe seat.

“Gerrymandering is just a vile thing for democracy,” Ricker said. “If you sit well, you don’t feel obligated to meet the needs of all voters, maybe only those who donate to you. [You may] happens to be a low-income voter and you put pressure on the lenders, but the lenders don’t put that pressure on the elected official because they’re all comfortable with the status quo.

Ricker also mentioned that Republican candidates might think their attendance at a forum held in Oberlin would net them any votes and ultimately prove futile, given the city’s strong Democratic leanings.

Montoye, however, was encouraged by the responses the OCCN planning committee received from applicants, even those who declined to attend.

“We spoke to the current [Ohio] attorney general, and I spoke to his scheduler on the phone,” Montoye said. “He said they had already committed to an event in Toledo that night, but he pointed out that he thought it was a really, really important event and that he wanted to be there, and that “He just couldn’t make it. I think that was a well-received invitation.