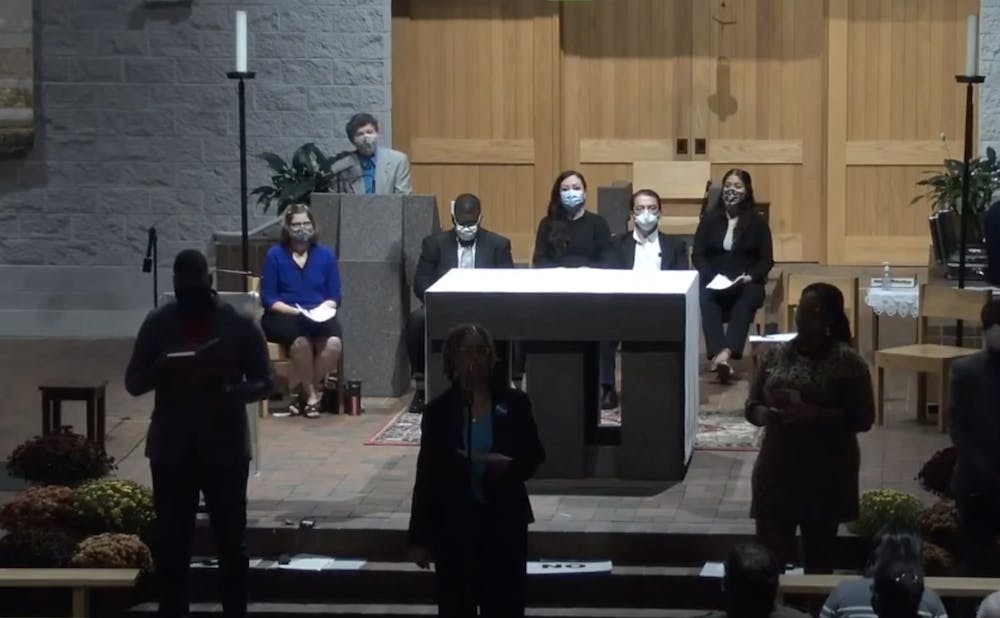 “Through the listening sessions, we have confirmed that Latin American communities are under or overpolished due to the lack of bilingual police officers,” wrote Reverend Herbert Reynolds Davis, senior pastor of Nehemiah Church, in A press release.

â€œWe hope that the next Mayor of Durham will lead in creating the kind of partnership that has the potential to create better homes for all groups in Durham,â€ Brother Hugh Macsherry wrote in the press release.

The assembly was also a “non-partisan call to quash the vote,” the press release said.

â€œWe never support any of the candidates. Instead, candidates for mayor and city council can always decide to approve our priorities, â€wrote Martha Ramirez of Iglesia Presbiteriana Emanual.

The event was mainly held in Spanish, with the organizers acting as translators for the English speaking applicants.

At the start of the candidate part of the event, each candidate had the opportunity to introduce themselves to the public.

Current Ward 2 Councilor Mark Anthony Middleton said he was seeking “permission for four more years to continue the work that [he] actually started with many of you in this room – working to continue to develop black and brown power in the city. “

â€œIn fact, I was with the Latin Congress years ago, before I was in power, walking the halls of our legislature, pushing for provisional driver’s licenses so people could drive and bring in products. in the city from farms, when I was working on faith [identifications], when we worked to have bilingual counselors in schools so that all of our children could learn and thrive, â€said Middleton.

Current Ward I City Councilor DeDreana Freeman told attendees she was working with a nonprofit focused on “reaching out to children of color who are black and brown and our community, working closely with their parents. , their caregivers and families to make sure they have the academic support they need. need to be successful from birth to college or career.

Ward III contestant Leonardo Williams explained that he was a two-time Durham Public School Teacher of the Year award, restaurant owner and co-founder of Latino Ambassadors at the Southern School of Energy and Sustainability.

Get The Chronicle delivered straight to your inbox

Subscribe to our weekly newsletter organized by an editorial. Cancel anytime.

â€œWe might be siblings, certain of a different song. But we are all brothers and sisters with the same heart. I love Durham and I’m sure you will too because you’re here tonight, â€said Leonardo Williams.

Leonardo Williams added that he “[wants] us to solve the problems together.

Mayoral candidate Elaine O’Neal joked about her knowledge of Spanish, saying, â€œI took some Spanish in high school, so I’m rusty, but I’m determined to relearn.

She noted that she served Durham for 24 years and that her tenure as a judge made her “very familiar with the stories we have heard tonight”. In particular, she worked with the Durham Police Department to try to ensure that communication was bilingual.

Marion T. Johnson, candidate for Durham City Council, told the audience that her parents immigrated to the United States 40 years ago. Johnson is a first generation American – “and very proud of it.”

â€œI know one of the things about immigrants is that we can always find our people and we can always settle wherever we go. I am blessed to have found my people in Durham and to have chosen Durham as my home. And that’s why I’m running for office, â€Johnson said.

Johnson currently works for a black-owned social justice consultancy that works with nonprofits and foundations to focus fairness in all aspects of their work. Equity and justice are the two main thrusts of her platform, she said.

â€œI want to make sure Durham is a safe and affordable place to live for all of our residents,â€ he added. He noted that he has worked in a nonprofit organization for the past four years and has supported Latinx community groups.

Sylvester Williams has expressed his enthusiasm for speaking in a church.

“I am so excited to be here to be on the Candidates Forum where they are not afraid to call JesÃºs Cristo’s name,” he said.

The organizers then asked the candidates to answer â€œYesâ€ or â€œNoâ€ to each of the questions asked. After all the questions were asked, they were all given the opportunity to expand.

Ramirez asked O’Neal, “If you are elected, are you going to organize and attend a meeting with the new chief of police and the leadership of our organization to discuss our security agenda?”

O’Neal replied in the affirmative.

â€œI hope to have more than one meeting. I would like to establish a relationship where you provide advice, leadership and help me set goals that I can implement. I intend to rule with you, â€she said.

A leader of the forum asked O’Neal, “If you are elected, will you arrange and attend a meeting with the Durham District Attorney to discuss ways to strengthen the legal consequences for non-compliant homeowners?” violations of the housing code?

O’Neal answered yes and was greeted with applause from the audience.

During his opportunity to develop, O’Neal said, â€œThere was a community life tribunal established under my jurisdiction when I was chief justice of the district court, so I’m well aware of how this process works. . And we will work to restore that relationship and that tribunal. I know Constance Stancil [director of Neighborhood Improvement Services for the city of Durham] and its staff will work together on a racial equity task force. “

Questions to candidates for municipal council

Candidates were asked if they would meet with Latin Congress leaders within 90 days of taking office to discuss the collective congress agenda. All the candidates answered in the affirmative.

The second question asked by the organizers was, “If you are elected, will you fight for funds so that Durham increases the percentage of bilingual police officers by at least one percent every year for the next five years?” Or five officers a year?

Bilingual police officers in Durham receive a bonus of $ 1,000 â€œin accordance with their good performance as a reward for their skills and their extra workloadâ€.

The third question asked by the organizers was: â€œWe have learned that Durham is losing bilingual agents to the benefit of all the cities. If you are elected, will you order the chief of police to review the remuneration practices of bilingual police officers and help increase the additional bonus to at least $ 1,500 per year? “

The last question asked of the candidates was, â€œOur research indicates that the community safety service is still in the planning stages and will soon begin hiring community response staff. If you are elected, will you work with us to ensure that this service promotes the safety of the Latin American community by hiring bilingual response personnel? “

Candidates then had the opportunity to provide detailed answers to the questions.

â€œI know what it’s like to be in this community and have real concerns about housing and public safety,â€ Freeman said, â€œAnd I mean I want to work with you.â€

Freeman said that while “our problems may be different”, they are in fact “very parallel”.

Johnson reiterated that accessibility and community safety are two major elements of his platform.

â€œIt is crucial that all of our municipal services are accessible to all and are culturally competent for all. It doesn’t matter how much money we have, what language we speak or how long we’ve lived in the city, â€Johnson said.

O’Neal noted that the questions posed to the candidates “are just the beginning of a conversation.”

â€œWe must also seek to partner with Durham Public Schools and other agencies to build community capacity so that your children and my children can become police officers in this city and be who they want to be,â€ a- she declared.

Editor’s Note: The Chronicle viewed the forum from a recording provided by one of the event’s organizers. The recording ended before Sylvester Williams, a Ward II candidate, and AJ Williams, a Ward III candidate, had a chance to justify their answers to the question-and-answer panel. To be fair to all candidates, The Chronicle did not include the justifications given by their opponents, Mark-Anthony Middleton in Ward II and Leonardo Williams in Ward III, respectively. The only candidates presented were DeDreana Freeman and Marion T. Johnson from Ward I and mayoral candidate Elaine O’Neal.

Kathryn Thomas is a sophomore at Trinity and associate editor of The Chronicle’s 117th volume.