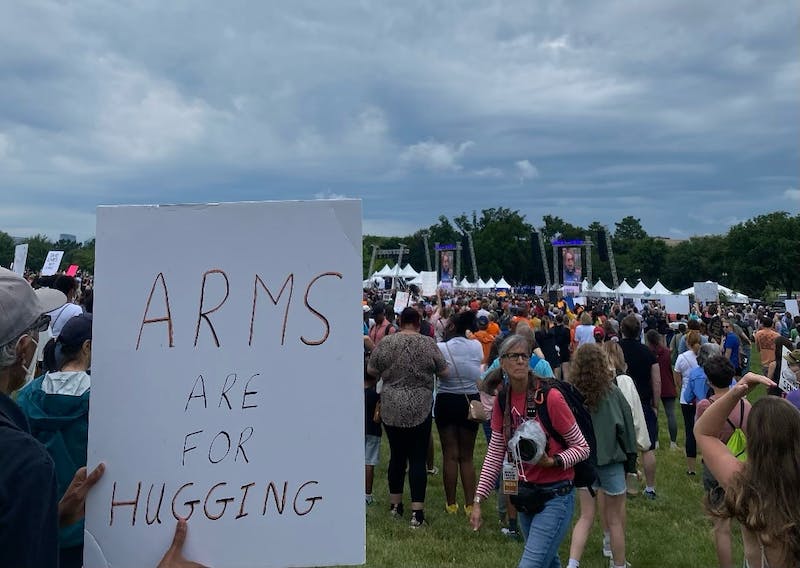 In the wake of mass shootings, Princeton students hold a community rally for gun control

Following the death of 21 people in the school shooting in Uvalde, Texas, Princeton students and community members have come together to advocate for gun reform and rally behind the movement National Against Armed Violence.

On June 11, the Princeton-based Coalition for Peace Action (CFPA) led the “Rally Against Mass Shootings and the Epidemic of Gun Violence in America” at Hinds Plaza. On the same day, a group of Princeton students joined thousands of protesters with March for Our Lives in Washington, D.C.

Both rallies were part of a day of action in nearly 500 U.S. cities coordinated by March for Our Lives, the youth-led gun violence prevention group formed after the mass shooting in Parkland, Florida, which killed 17 high school students in 2018.

According to CFPA executive director Reverend Robert Moore in an interview with The Daily Princetonian, about 350 people attended the rally in Princeton.

Attendees at Princeton rally held up signs; heard from survivors of gun violence, elected officials and religious leaders; and chanted slogans such as “guns are bad”. U.S. Representative Bonnie Watson Coleman (DN.J.) was present at the protest.

“We need to protect our communities from this epidemic of gun violence,” Zwicker said. “As Congress gives us hopes and prayers, here in New Jersey, we are taking action.”

“We have to vote and we have to lobby,” Moore said at the protest.

In a press release ahead of the rally, Moore stressed the importance of harnessing the energy of the moment to advocate for real change.

“We invite[d] let everyone come together to mourn, but more importantly, be empowered to come together to stop and reverse the growing epidemic of gun violence across our country,” he said. “One short-term action that will be advocated for is active support for a set of eight new gun safety bills to further strengthen New Jersey’s already tough laws.”

In Washington, DC, more than 50 college students participated in the March for Our Lives rally.

Get the best of ‘the prince’ delivered straight to your inbox. Subscribe now »

“Many [Princeton students]including myself, attended original March for Our Lives events in our hometowns four years ago,” Mary Elizabeth Marquardt 23 wrote in a message to “The Prince.”

“I think we’ve all been inspired by the same guiding principle: we’re angry that nothing has been done to address this incredibly urgent issue over the past four years, and we’re incredibly ready to see change.” she added.

Princeton Against Gun Violence (PAGV) Co-Chair Julia Elman ’23 detailed a notable and chilling moment from the rally in DC in an email to “The Prince.”

“During the minute of silence for victims of gun violence, someone at the front of the rally ran onto the stage, causing mass hysteria as someone nearby interpreted his screams as ‘I’ve got a gun’ (he was actually shouting ‘I’m a god’),” Elman wrote. “Unfortunately our group was close to the front of the rally which forced us all to flatten out. My co-president, Ana Blanco [’23]told everyone to get down, and as my confusion overcame, I remembered that lying on the ground during a shoot is better than running, so you don’t get shot in the back.

For Elman and many others at the rally, she said, “the threat played into our greatest fears.” She said she hoped those affected were “taking care of themselves and healing this week”.

Speakers at the DC protest included March for Our Lives co-founders David Hogg and X Gonzalez, lawmakers and other survivors of gun violence.

“The most impactful speech was Cori Bush discussing her own experience of gun violence,” wrote Paul-Louis Biondi ’24 in a message to the ‘Prince’.

Moving forward, Elman said PAGV continues to advocate for gun reform. But their efforts, and those of groups like theirs, face unique challenges.

“As gun violence prevention advocates, it is exhausting to see a surge in passion and interest after a tragic event, only for it to die down as another disaster strikes the world. happens and becomes the focus of our attention,” Elman said. “But we keep fighting. The recent marches give us hope – we cared four years ago and we still care today.

A recording of the Princeton protest is available here.

Lia Opperman is an associate news editor who often covers university affairs, student life, and local news. She can be reached at [email protected]on Instagram @liamariaaaa or on Twitter @oppermanlia.