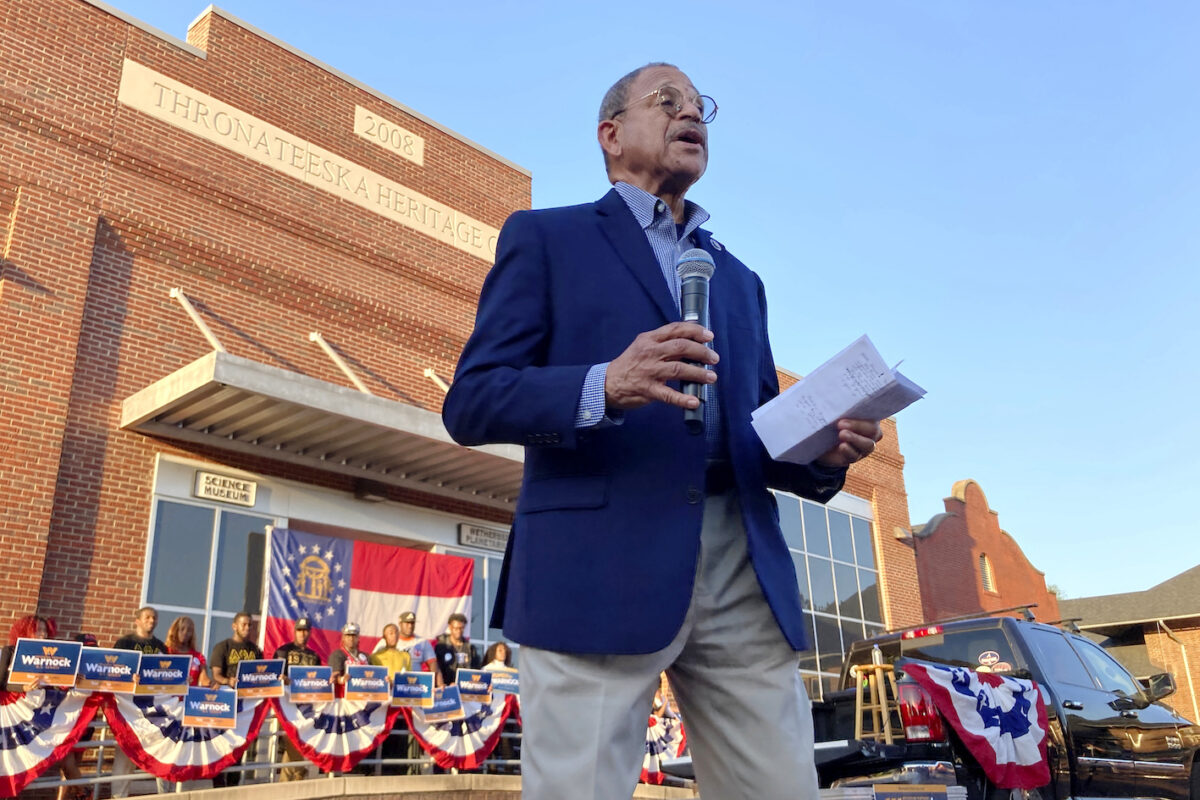 Sanford Bishop asked voters to judge him on the actions of his 30-year record in Congress during a debate Sunday ahead of the midterm elections.

His opponent, Chris West, a young lawyer and developer with no big case to run on, asked voters to consider what Bishop failed to realize. He asked them to reflect on a nagging ethics investigation into alleged embezzlement and decide that maybe it was time for a change.

Bishop has held the seat since it was designed as a majority-minority district in 1992. Republicans have a better chance of unseating him since this year’s redistricting has changed the district’s demographics. West won an upset victory in the Republican primary over far better-funded and well-known Jeremy Hunt, a Fox News analyst and retired military officer.

“The 30 years I’ve been honored to serve the people of the Second District is an asset,” Bishop said. I’ve had 30 years to use the process to improve people’s lives through jobs, a stronger economy, better education, more accessible health care, and a strong national defense. I believe I did that, I delivered and I believe I did it well.

The Democrat also said his seniority would put him on key House committees if re-elected.

In response, challenger West pointed to rising crime and inflation under Democrat leadership.

“He refers to issues like low crime and the economy is doing well. Apparently he’s been in Washington so long that he doesn’t realize how bad things have gotten in our district,” West said. “I mean, high inflation, high gas prices. Our farmers are crushed. You talk about our farmers. If we have been so successful in our campaign, it is thanks to the farmers where we started. I come from the agricultural community… Our farmers, they are in crisis mode.

“A lot of people didn’t plant this year because they didn’t know if they would be successful,” West said. He tied the woes of the farming community to the policies of the Washington Democrats Bishop had voted for.

Bishop said he has been regularly supported by peanut, pecan and cotton growers and has received awards from agricultural organizations such as the American Farm Bureau Association and the Georgia Farm Bureau. “Any agricultural community that is informed knows full well what I have done to preserve and protect agriculture in Georgia and the United States of America.”

Atlanta Voice’s Donnell Suggs asked West, who is campaigning as a job creator, how he would do it. West said as a lawyer and developer, building supermarkets and chain stores like Dollar General, he created more than 1,500 jobs. Bishop said he has participated in many federal programs that have created jobs, including one that created 29,000 jobs in the Fort Benning area in one year.

West returned several times to one point: that the district, after 30 years of representation by Bishop in Washington, is one of the poorest in the United States. Its median household income is less than $40,000 compared to the national average of nearly $68,000.

And he pounded another: the ethics investigations against Bishop, still open after ten years, accusing him of misusing $90,000 of campaign and district office funds for golf clubs, memberships in hobby clubs and car repairs.

Bishop – noting that he had been an Eagle Scout three times – said he believed congressional ethics were key and acted quickly to remedy the situation and reimburse questionable expenses once they were incurred. had been questioned.

“Ethics are important; transparency is important,” he said. “And I fully support the highest standards of conduct for members of Congress.”

Like all Republican candidates in the day’s debates, West was pressed heavily on the abortion issue, including by Bishop.

“How will he explain to the women of Georgia that he would rather see them die than abort even in cases of rape or incest? asks the bishop. “You say there should be no exceptions.”

West denied that this representation was his general Republican position. “Our position has been distorted.”

“There are no laws on the books in this country that disregard the life of the mother.”

Bishop claimed West argued in the primary for no exceptions. “It’s a decision for a woman and her doctor, not for the government,” he said.

Bishop urged voters to support him based on his record. His opponent, he says, has none.