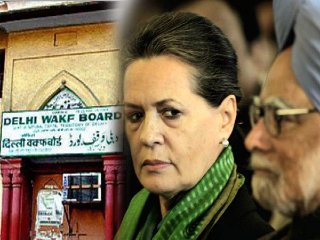 New Delhi- Ahead of the 2014 Lok Sabha elections, the Congress-led UPA government offered 123 prime properties in the capital to the Delhi Waqf Board. As ‘Times Now’ reports, the cabinet made the decision days before the 2014 Lok Sabha elections. After the ruling, a secret note was signed by Additional Secretary JP Prakash, which read, “Denotification of 123 properties in Delhi under the control of Land & Development Office (LNDO) and Delhi Development Authority (DDA) allowing the title to return to the Delhi Waqf Board will be communicated to the Ministry pending official publication of the minutes”.

#WaqfLandSecretNote#EXCLUSIVE | Days before the 2014 elections, the UPA government “offered” 123 prime properties in Delhi to the Waqf.

“Please refer to the telephone request”, @RShivshankar takes us through the details of the “secret note”. pic.twitter.com/TfcDOShyPJ