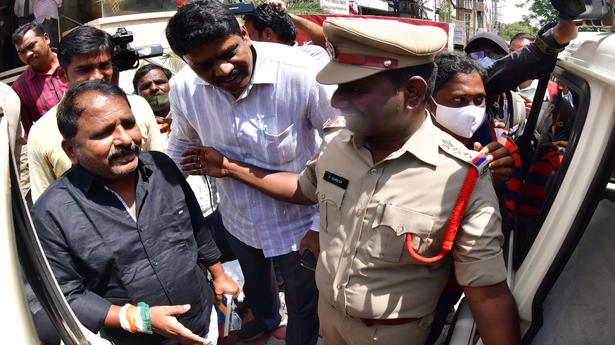 Andhra Pradesh Congress Committee (APCC) Chairman, Sake Sailajanath, other senior party leaders and activists were arrested on Thursday as they protested the interrogation of Rahul Gandhi by the Enforcement Directorate of law (ED) in the National Herald case.

Responding to a call from the central leadership of the party, the APCC called “chalo Raj Bhavan”, and even as the party leaders began their protest march, they were stopped by the police who said that the party did not have permission for the protest proposal.

After the protest, Mr Sailajanath was due to address the press at the Southern Grand Hotel in Gandhinagar, where police have been deployed to head off any possible trouble.

The State Congress leader, who was moved to Krishnalanka police station along with other party leaders, strongly condemned the Narendra Modi government’s ‘autocratic rule’ in the Center and the rule of Jagan Mohan Reddy in the State.

Calling the ED action “vendetta policy of the BJP government against the opposition leaders”, Mr Sailajanath objected to the police forcing their way into the AICC headquarters and allegedly beating up party leaders and workers inside the premises and said that “this type of hooliganism” would not be tolerated.

Chanting slogans of “Modi hatao, desh ko bachao”, the protesting Congress leaders demanded that “the charges against Sonia Gandhi and Rahul Gandhi be dropped and that Prime Minister Narendra Modi issue an unconditional apology to the Congress Party and the people of the nation”.

Mr Sailajanath said the Constitution had given the right to peaceful protest, but leaders were trying to suppress them. “People are watching and they will teach such governments a good lesson in the next election,” he said.

The chairman of the municipal party unit and some others were transferred to Governorpet police station, while others, who were not allowed out of Andhra Ratna Bhavan, staged a protest in protest. crouching on the floor of their party office.